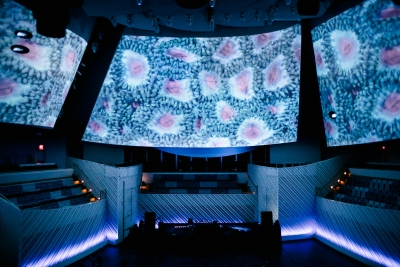 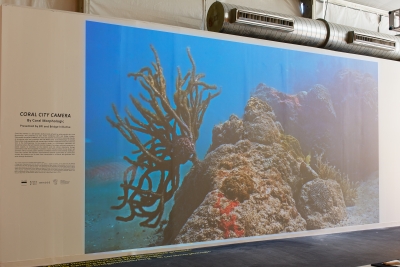 The focus of Coral Morphologic’s art, research, and community action is centered on urban coral communities in Biscayne Bay. After years of studying this ecosystem, Coral Morphologic has identified populations of highly biodiverse and resilient coral communities that are colonizing the human-made infrastructure along the bay’s developed areas. The artist-scientists are studying these populations in conjunction with NOAA and the University of Miami to better understand their apparent resistance to disease, siltation from dredging, and pollution as compared to offshore natural reefs.

Coral Morphologic’s on-site research plan to continuously monitor one of these coral communities utilizes an advanced 360-degree livestreaming underwater camera installed at PortMiami on a coral research and transplant site. In the future, probes attached to the camera will monitor water quality, pH, and temperature. The output of the camera will be broadcast into public spaces as well as twenty-one school districts across the state through partnerships with the Everglades Foundation, teaching students to work as citizen scientists.

Bas Fisher Invitational (BFI) is an artist-run space dedicated to creativity, experimentation, and discourse in contemporary art, creating a bridge between Miami and the international art world by curating programs alternating between local and global.

By bringing artists and scientists together, Bridge Initiative curates public art that draws attention to the impacts of climate change in unique and engaging ways.