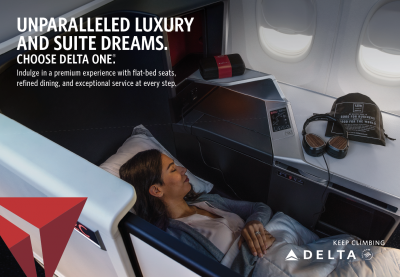 Delta Air Lines (NYSE: DAL) is the leading US airline in Latin America and the Caribbean in products, innovation, reliability, and customer experience. Powered by its 80,000 airline professionals around the world, Delta continues to invest billions in its people, delivering a world-class travel experience and generating industry-leading shareholder returns. With its constant drive to invest, innovate, and expand, Delta today is the world’s number 1 airline by total revenues.
Delta serves nearly 200 million people every year, taking customers across its industry-leading global network to more than 300 destinations in over 50 countries.

Headquartered in Atlanta, Delta offers more than 5,000 daily departures and as many as 15,000 affiliated departures including the premier SkyTeam alliance, of which Delta is a founding member.

Delta provides service to 31 countries and 50 destinations in the region, offering over 1,400 weekly flights between the United States and Latin America/the Caribbean.

Delta has been recognized as a Fortune top 50 Most Admired Companies in addition to being named the most admired airline for the eighth time in nine years. Additionally, Delta has ranked no.1 in the Business Travel News Annual Airline survey for an unprecedented eight consecutive years and for 2018 was named one of Fast Company’s Most Innovative Companies Worldwide for two consecutive years.

Delta believes that its social responsibility lies at the intersection of its core values and core competencies, making a difference where Delta people live, work, and fly by giving time, talents, and one percent of the company’s annual profits.

Diversity and inclusion are core to Delta’s culture and Delta believes it should be reflected in its people, the companies with which it does business, the way it treats customers, and the manner in which it serves the world.